Back to Splash Page 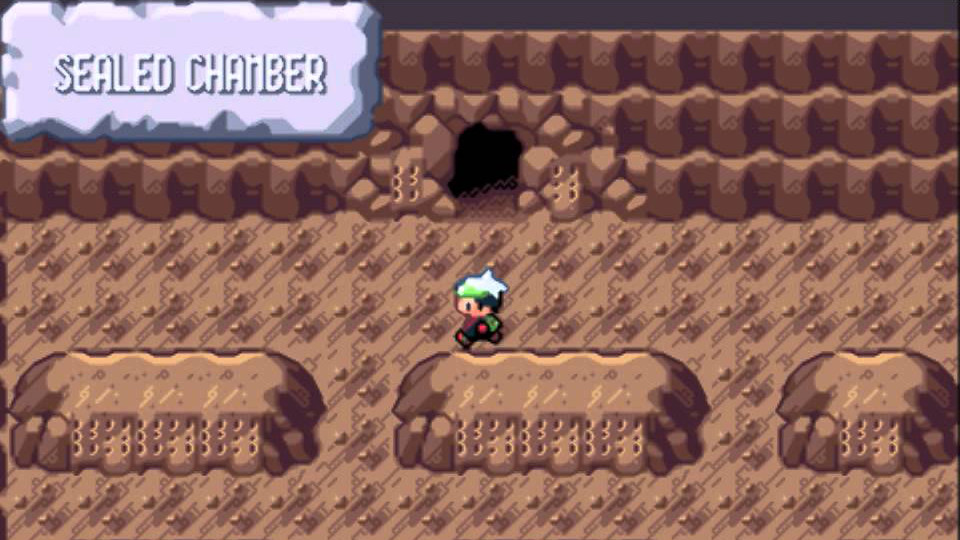 Description: In the third generation of Pokemon, players must decipher passages in Braille in order to unlock access to the legendary trio, Regirock, Regice, and Registeel.

Argument for it being a mechanic:

->Thought One: Well, it's clearly a puzzle that the player must solve, and solving it allows access to powerful monsters. So, it must be a mechanic. It lives in a double hermeneutic.

Argument for it not being a mechanic:

->Thought One: It may actually be more than a mechanic, because its solution relies on outside knowledge. Of course, the idea of outside knowledge, and that a mechanic is contingent upon vacuum-sealing the game into discrete qualities, is foolish. But, would we say that the questions in a game of Trivial Pursuit are mechanics? See, that's the actual question at hand. We can say something along the lines that having different categories from which one could pick in Trivial Pursuit is certainly mechanical, but can we make one's sports knowledge into a mechanic? Can we make lives mechanical?

->Thought Two: Or, maybe it's more like Scrabble! In Scrabble, there is clearly a mechanical feature built into which words can be played. There exists a Scrabble dictionary that will identify for you whether or not the word is legal. Knowledge of words in general are useful tools in Scrabble, certainly, but the mechanic of Scrabble is knowledge of the particular words that are legal as defined by the Scrabble dictionary, and which are legal in terms of placement on the board, and which are legal in terms of the pieces that you have available to you.

Argument for it being a mechanic:

->Thought Two, cont'd: To continue the previous thought, it is notable that the Gen 3 is not relying on general outside knowledge of Braille. Just as with Scrabble, which is not a test of the English language but rather a test of knowledge of Scrabble dictionary items further constricted by the state of the game, Pokemon is actually testing knowledge of a very specific string of Braille. This is actually going to get to my sort of larger point here, which is that this was never a test of Braille, in the way that Pokemon is a test of the specifics of system optimization and other Smogony shit, but rather the Braille is a test of a community's ability to solve this string together.

->Thought Three: Get this, and die by it: the Braille in Pokemon had nothing to do with whether or not you had knowledge of Braille, but whether or not you had access to the Internet. Or, it was the Mew truck of Gen 1 in reverse: therein, access to a larger font of extra-ludological information humorously lead players astray and convinced them that an original art asset was indicative of access to a legendary Pokemon, whereas herein, access to the extra-ludological makes it so that the mechanic is not testing if one person knows Braille but rather if any people who have ever played Pokemon have known Braille. The information on the outside is the mechanic, yeah?

Argument for it not being a mechanic:

->Thought Three cont'd: And is that even a fucking mechanic? Of course there is going to be at least one player who knows Braille and who is willing to post online about it. This is how it differs from Scrabble or from Trivial Pursuit: in both of those games, there are rules to prevent the extra-ludological from having an impact on the flow and mechanics of the game, but here, there is no such prohibition! Access to the Internet, and the grace of waiting a few months after the game's release, or purchasing a strategy guide, guarantees that you will get your damn Regis. In fact, it's all of the stuff you have to do prior, like getting your seventh badge and surfing through the wild environs of Hoenn that have an actual impact on the states of the hermeneutics of the game.

Take away: This is probably not a mechanic at all, because, though the Braille is truly aesthetic, the nature of gaming at the time, which was driven by the Internet, precludes this from ever being an actual challenge. This, of course, draws us closer to the question of how to deal with social games and games during the period of the internet (distinct phenomena), but we'll get to that later. If it was a mechanic, well, it wasn't one for very long.